This Page is under Construction! Check Back July 2022!
n this page you'll find preschool Tropical Island and Pirate themed activities for your preschool lesson plans.
In the meantime, you might like the Beach Activities on our Summer Fun Page, or Ocean Theme!
Click on a button below to view a section-use the yellow arrow to return to the top!

Club Members can download all of ​our Tropical Island and Pirate Resources and Theme Planning Guide for free! ​Not a member? Learn More Here
Click on a button below to view a section-use the yellow arrow to return to the top!

Do you need helping planning your Tropical Island and Pirates theme? Use the suggested learning objectives and vocabulary ideas found on our Theme Map to help you plan your own Lessons. 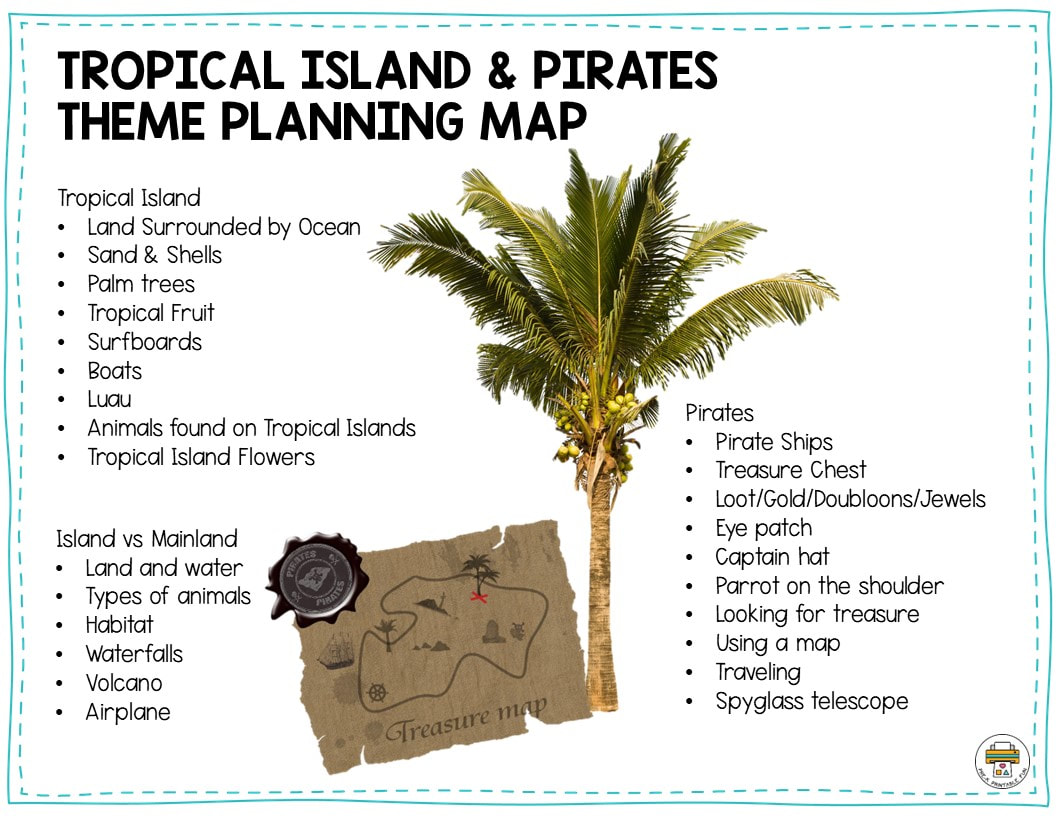 Sign up below to get a Free Preschool Tropical Islands and Pirate Sample Lesson Plan for this theme!
Please be sure to save it to your device!

Cut paper plates in half. Have children paint or color their half of the plate brown. Give them a variety of different colored construction paper in shapes that could be used for the masts and sails. Give them markers, crayons, paint, etc. to decorate their boat.

Have children drawn their own pirate maps on butcher's paper. During circle or group time, show them examples of pirate's maps and talk about what they could add to their maps before letting them go off an draw on their own. You could have them use markers or crayons or even paint if you wanted!

Give children paper towel tubes and a variety of art supplies such as paint, markers, stickers, pom poms, stick on jewels and let them decorate their own pirate telescope. These would be great to keep on hand and use in the dramatic play center!

Stuff a brown paper lunch bag with balled up paper scraps. Tie the bag closed. Have the students paint the bottom with a mixture of yellow paint & glue. While wet, press brown tissue squares onto the paper bag "pineapple". Lastly paint the top green and cut the pineapple "leaves".

Coconut Shells have been used to make a variety of instruments, Use Coconut shells to make your own music.

Provide each student with a large green construction paper frond.
Using scissors have them cut the leaf to create fringe edges. Secure the leaves to the top of a palm tree trunk.

Put pirate clothes, hats, eye patches, etc. in your dramatic play area
and let children dress up and pretend to be pirates.

Provide students with a variety of brochures to tropical islands, suitcases, and a box of "summer" clothes and accessories. They can plan to pack for their vacation! You can also include Hawaiian shirts, sunhats, sunglasses, beach towels, swim goggles/fins, and play cameras. Set up our Airport Dramatic Play set for some extra travel fun!

Add a kiddie pool with sand to the dramatic play center along with shovels. Bury various pieces of treasure and have children pretend they are pirates searching for their buried treasure.

Using large boxes, pieces of cardboard and a tablecloth or old sheet, create a pirate ship in the dramatic play area. Leave one side of the box open so that children can easily get in and out of the ship. Invite children to pretend they are pirates on the open sea.

Set out a variety of blocks in the building center and challenge children to build their own pirate ship.

Set out a variety of recycled materials like paper towel tubes, newspaper, etc. along with tape and glue. Invite children to create palm trees. You can even challenge them to try to make the tallest palm tree and measure each tree together as a class!

Put out pirate puppets (can include pirates, ship, treasure chest, etc.) and invite children to put on their own pirate plays.

Set up a sand tray with pirate themed letter cards in your literacy center.
Have students practice forming the letters by using their finger to draw the letter in the sand.

Who Took the Gold from the Pirate's Chest-Sing

I Spy With My Little Spyglass

At group pass around a spy glass, and challenge your students to describe something they see (without naming it). This is a good opportunity to practice using describing words that relate to what the object looks like (Color, Size, etc). Prompt your students using 5W questions. Where can you usually find it, What does it look like, When would you use it? Etc. Once the group guesses the correct object, the next student can take a turn.

How to Be a Pirate by Sue Fliess
Portside Pirates by Oscar Seaworthy
The Pirates on the Ship by Ann Bonnie
The Grumpy Pirate by Corinne Demas
Shiver Me Letters: A Pirate ABC by June Sobel
Chicka Chicka Boom Boom by Bill Martin
How I Became a Pirate by Melinda Long

Fill a small bin or treasure chest with different colors and sizes of plastic jewels. Have children sort the jewels by color, size, or color and size. Add some fine motor practice by having the students use tweezers to pick up and sort the jewels into the correct bins.

Spray Paint your locks and keys. Have children match the Color of the key to the matching colored lock, and practice opening them.

Organizing Data: Give students to try tropical fruit (Pineapple, Kiwi, and Mangoes). Give them a clothespin. Set out images of each fruit and have students "vote" on which fruit they liked the best by clipping their clothespin to it. Count the clothespins as a group.

Use a sand timer to take turns. Learn about the passing of time.

To a bin add sand, plastic jewels/jewelry, plastic doubloons, and other items to make up treasure. Include some plastic palm trees and small treasure chests. Have children find the buried treasure using small shovels, scoops, tweezers, etc. Children can also re-bury the treasures for others to find! See the Magnetic Treasure option below!

Explore science by giving children a variety of items to test if they sink or float. These can be everyday objects you have around the classroom or home, or you can use some pirate specific objects that you have gathered for your unit. Give the children a tub of water and have them predict what they think will float and what they think will sink. Have them test their ideas.

Freeze plastic doubloons and jewels in an ice cube tray.
Have students use salt and/or water to melt the ice and get to the treasure!

Print off the pirate head pom pom mats. Each pirate has a different colored beard and places to put pom poms. Have children use tweezers to put the correct color pom poms on each pirate's beard.

Make a treasure chest from a cardboard box that has a small opening at the top. Either using their fingers or tweezers, have the children fill up the pirate ship with jewels or plastic doubloons to practice their fine motor skills.

Message in a Bottle

Have children draw on small pieces of paper, roll up the paper and then put them in a variety of different empty bottles and then seal the bottles. Children will practice a variety of fine motor skills as they color, roll, put the paper into the hole, and twist the caps to shut the bottle.

Use Pirate Play dough Mats to help children with fine motor skills.
For each mat, the child uses play dough to create the object.

Get to the Gold

Use plastic stepping stones or circles and have children hop along the stones to get to the treasure chest at the other end. Have them grab a piece of treasure and bring it back with them.

We're Going on a Treasure Hunt

Using the preschool chant "We're Going on a Bear Hunt" as a guide, adapt the words to simulate children going on a treasure hunt. Sing together and have children do the actions.

Explain to children that you are heading out on a pirate ship to the ocean. Give them different commands that the captain might tell them and have them practice these actions. Call out an action and have the students complete an action. You can play a version where the last person doing the action is out or you can focus on just practicing listening skills and have everyone do the actions each time.

Place out several hulu hoops and plastic balls to use as cannon balls. Have children practice trying to hit the target by getting their cannon balls inside the hulu hoops

"Set up a pirate obstacle course for children to go through. Some ideas for the course include:
-Balance beams as planks
-Scooter boards as dinghies
-Ramps as ship gangplanks
-Rubber circles as stepping stones
-sandbox as quick sand "

After reviewing the sides of a ship, draw a chalk outline of a large ship on the pavement. Have your students stand in the middle. As you (the Captain) call out the different sides (bow-front, stern-back, port-left, starboard-right) of a ship and have them move to the correct spot.

Cut out several coconuts from brown foam sheets.
Place them on top of the parachute and have the children "shake" the coconuts off the sheet.

Read the story Even Pirates Need to Listen by Mike Carnes and Carry Goddard,
and talk about the importance of teamwork and cooperation.

As a group, play the game Pop Up Pirate. Children will practice taking turns and following rules of a game. You can also incorporate other skills such as color identification with the swords, counting the swords to see how many each player has, and communication skills by modeling how children can tell one another it is someone else's turn.

Have children work as a team to complete a pirate themed scavenger hunt. You can give them a pirate's map that shows where doubloons are hidden and lead them to a treasure chest that has fun toys or treats. This activity would work well after the Map Reading lesson!

Have some fun at home by using all of the new pirate lingo your child has learned! Try a talk like a pirate day by incorporating as many new terms into your activities for the day as possible. You can even add in a funny pirate accent to make the day extra fun!

Classroom Management and Parent Engagement Ideas for your Program

Members can download all of these products for free using the special member links in the shop listings, or from the download area! Not a member? Purchase below, or find out how to join!

How I became a Pirate Book Companion Pre-K Storytime Activities